10 Most Visited Pilgrimage Places in the World

10 Most Visited Pilgrimage Places in the World. Get familiar with the most popular pilgrim sites that are a must see on your next trip.

TOP 10 PILGRIMAGE PLACES YOU CAN VISIT

1. Basilica of our Guadalupe, Mexico City 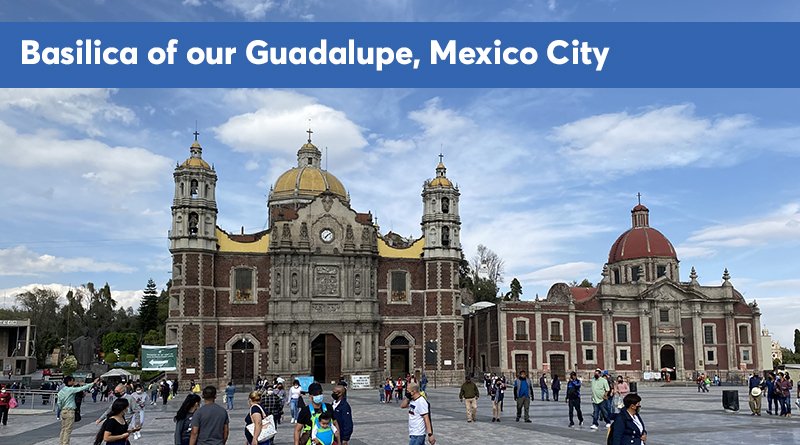 Millions of people visit this pilgrimage place as a temple. Furthermore, it is considered sacred because of its violent historical past. Its history continued when Spanish conquerors took over Tenochtitlan; they destroyed this temple. This place is sanctified because it was built in the North of Mexico City near the hill of Tepeyac, where the Virgin Mary is believed to have appeared to Saint Juan Diego Cuauhtlatoatzin. Moreover, in 1921, the interiors of this temple got ruptured due to a bomb attack. However, this temple still stands rigid even after the attack, making it pious and sacred. In addition, it also has a neighbor, i.e., New Basilica. The previous Basilica is known as the Old Basilica.  The best time to visit this one of the authentic pilgrimage places is near the 12th of December, where a feast of the Virgin of Guadalupe is held. Consequently, the shrine is the epicenter of celebrations throughout the whole country during this time. During this time, you can catch sight of parades, special masses, fireworks, etc., that take place. 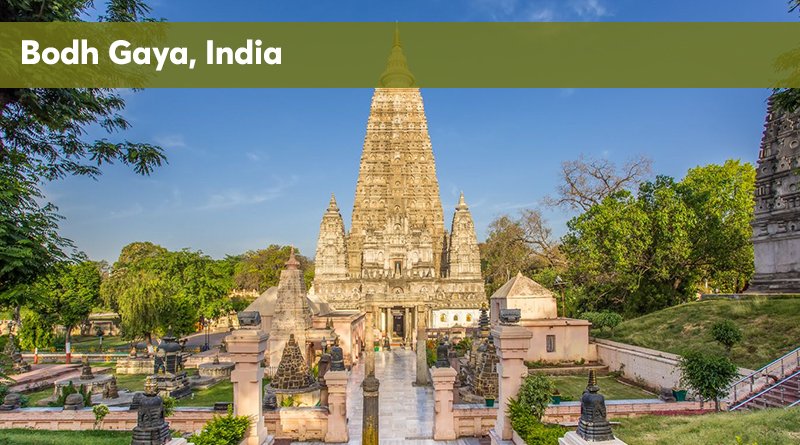 Bodh Gaya is one of the most historic pilgrimage places roughly 2600 years ago. Furthermore, its historical significance dates back to when Gautam Buddha sat beneath a bodhi tree and attained enlightenment, which is what Bodh Gaya is now. Therefore, this is the reason why many Buddhists around the world come to visit this place. Moreover, it is a place where the Bodhi tree stands, attracting many visitors worldwide. Various saffron-robed monks from Thailand, Bhutan, and many other nations wander in the city in groups, visiting the Mahabodhi Temple and other shrines to the Buddha. In addition, the route to Bodh Gaya passes from the 'Navel of the Earth,' which is another most famous pilgrimage place, i.e., Varanasi. 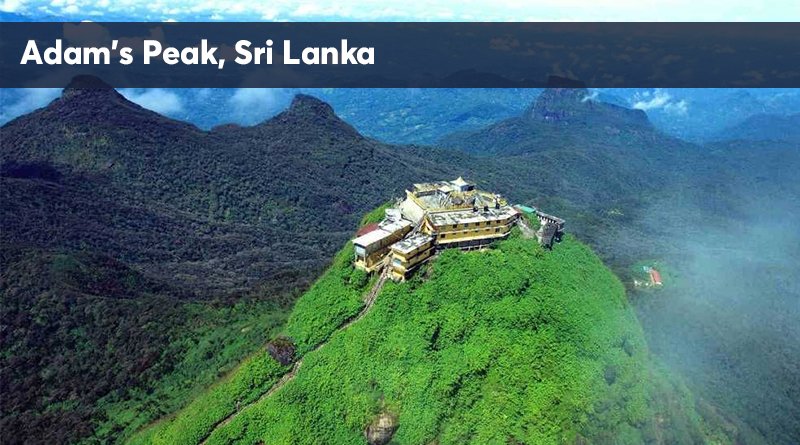 Adam's Peak is one of the indispensable Buddhist pilgrimage places, with the mountain an object of pilgrimage for more than a thousand years. It is well known for its "Sri Pada," i.e., "Sacred Footprint" in a rock formation near the summit. Furthermore, its story professes that there is a footprint of Buddha himself on the mountain. On the other hand, many Hinduism believers claim that the foot impression belongs to Lord Shiva or Hanuman. Whereas in some Islamic and Christian traditions, it is known as Adam or St. Thomas. In addition, the best time to travel to visit Adam's Peak is during the night hours. This is because there won't be the scorching sun over your heads, and you will climb the mountain with breaks.  The best part of this journey is that many halt spots are provided to you where you can relax and drink tea or juice to re-energize. Therefore, through your journey of 4.3 miles, you can watch a mesmerizing sunrise over Sri Lanka. 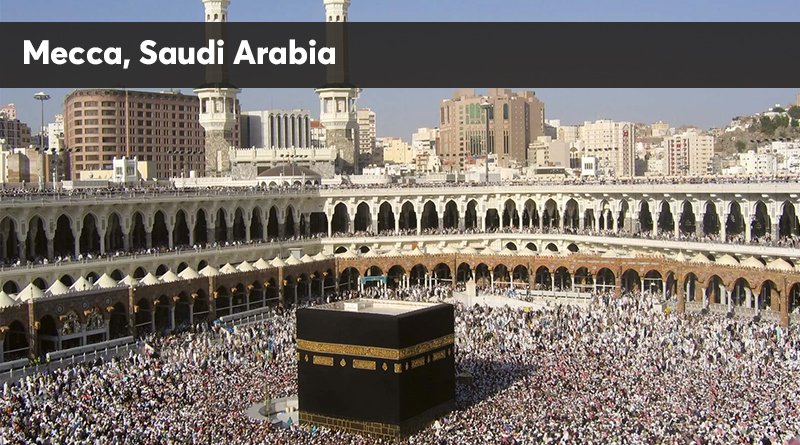 Mecca comes under one of the holiest pilgrimage places for Islamic people. Furthermore, Mecca gets up to 13 million visitors daily. Mecca is situated in the Arabian Peninsula and is located at a distance of 210 miles towards the South of Medina. Moreover, the devotees visit Mecca at least once a year. Mecca is considered as "the fountainhead and cradle of Islam." In addition, it is a spiritual place because its the birthplace of the Islamic Prophet Muhammad. Also, the 'Hira Cave' is located atop the Jabal al-Nur(Mountain of Light), which is just outside the city. Henceforth, in Hira Cave, the Muslims believe the Quran was first revealed to Prophet Muhammad. Besides, the Great Mosque of Mecca, known as the Masjid al-Haram, is home to Kaaba.  Also, if you plan to visit Mecca, then the last and final month in the Islamic calendar would be entirely busy because many worshippers visit Mecca to celebrate Hajj and worship. However, no one is allowed to enter Mecca other than Islamic people. But, Medina has allowed its non-muslim visitors to visit. Henceforth, Mecca is one of Islam's holiest places to worship. 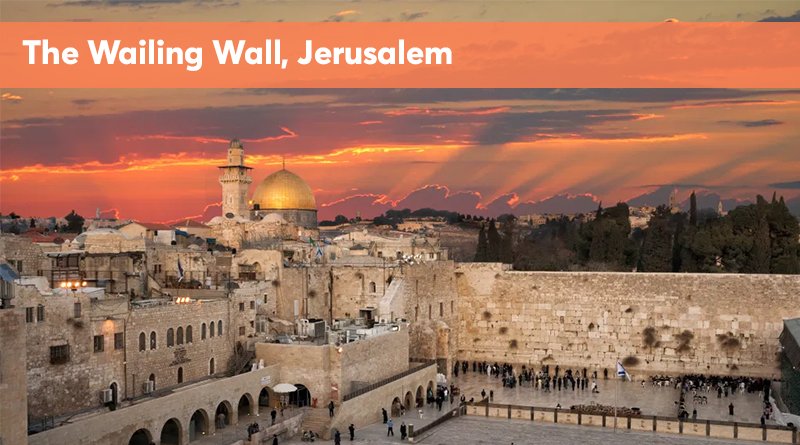 The Wailing Wall, also known as Western Wall, is situated in Jerusalem. Furthermore, it is one of the most visited pilgrimage places, and the number is increasing day by day. Moreover, it is a few of the holiest places for Jewish and Muslim people. Many people claim that Prophet Muhammad tied his winged steed, al-Burqa, on his Isra and Mi'raj to Jerusalem before embarking on his path to paradise. Therefore, the best time to visit the Wailing Wall is on Mondays and Thursdays, where you can enjoy their Bar Mitzvah ceremonies with the locals. 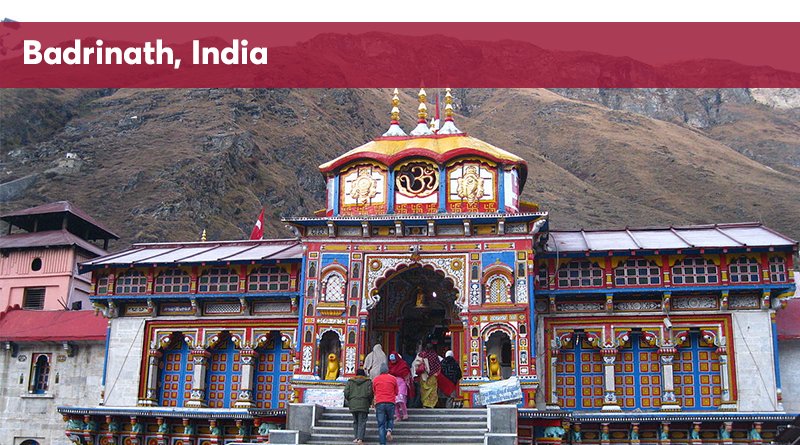 Badrinath is situated in Uttarakhand and is one of Hindus' most sacred pilgrimage places. Furthermore, Badrinath is one of the holiest places among the Char Dhams. Badrinath is a pious place that is believed to be the place of Lord Vishnu. In addition, according to Hindu mythology, it is a place where Mahabharata was written in the Vyasa caves located outside the town. Garwal Kings built the Badrinath temple in the 9th century. Besides, you might have a spiritual awakening after visiting this glorious sacred place. The best part of this pilgrimage place is that you can treat yourself in natural hot springs known as Surya Kund or Tapt Kund. Henceforth, this place has a chilly and cold climate throughout the entire year.  Therefore, the best time to visit this place is between May and June. Also, you can visit the place between September to October. Similarly, you can visit Charan Paduka, Vasudhara Falls, Neelkanth Falls, Tapt Kund, Bheem Pul, Brahma Kapal, and also Ganesh Gufa. 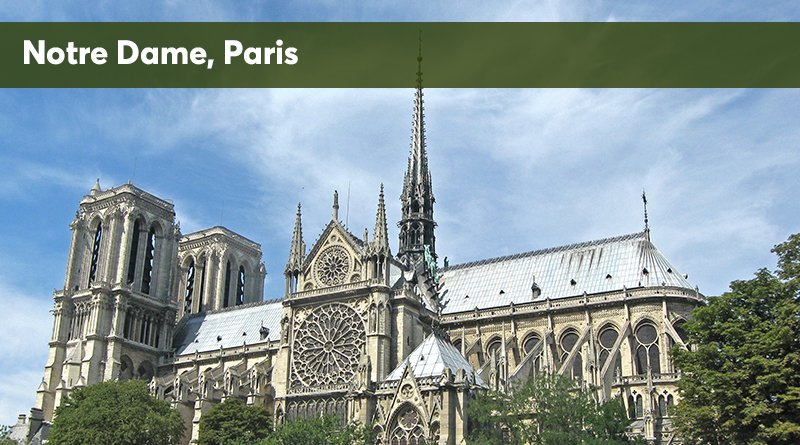 Notre Dame attracts millions of tourists worldwide and is one of the most visited pilgrimages places. Furthermore, the cathedral's construction began in 1163 under Bishop Maurice de Sully and was completed by 1260. Moreover, it is a pilgrimage place for Catholics and is the 13th most visited place in the world. In addition, if you are into French Gothic architecture, then this place would be the best for you to visit. Therefore, the design is a supreme combination of natural sculptures and also stained glasses. You can find the most spell-binding Romanesque architecture in Notre Dame. Hence, you can visit the place any time of the year, although mornings are the best time to visit the cathedral. Thus, the top few attractions in Notre Dame are FM Tour France, Hotel Dieu De Paris, Antiquities Eric Dubois, Square Jean XXIII, Sainte Chapelle and whatnot. 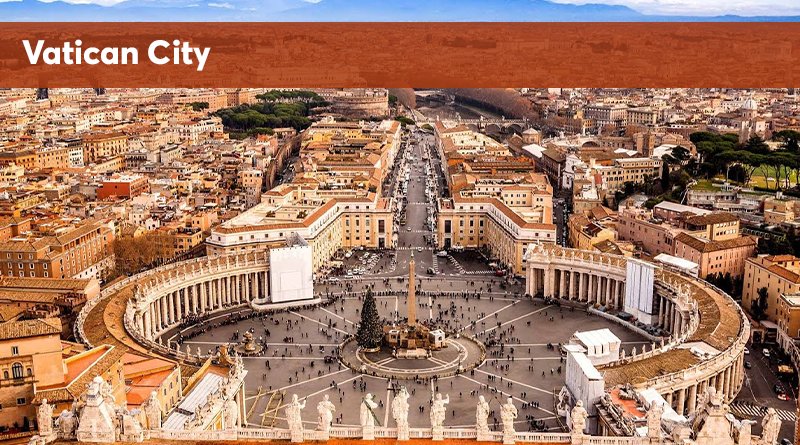 Around 4.2 million visitors visit Vatican City, making it the most visited pilgrimage place worldwide. Furthermore, it is a site of pilgrimage for Catholics. Moreover, it is an independent state-city situated in the center of Rome with enchanting and captivating architecture. Besides its enthralling architecture, many people visit Vatican city because it is considered the Pope's home. Henceforth, you can visit this place anytime; however, early in the morning or after 4 in the evening is best. Also, try to avoid Wednesday and Saturday mornings. Following, you can visit Peter's Basilica, Sistine Chapel, Pinacoteca, Piazza San Pietro, Vatican Gardens, Vatican Library. In addition, book cheap flights and hotels to travel to Vatican City right now. 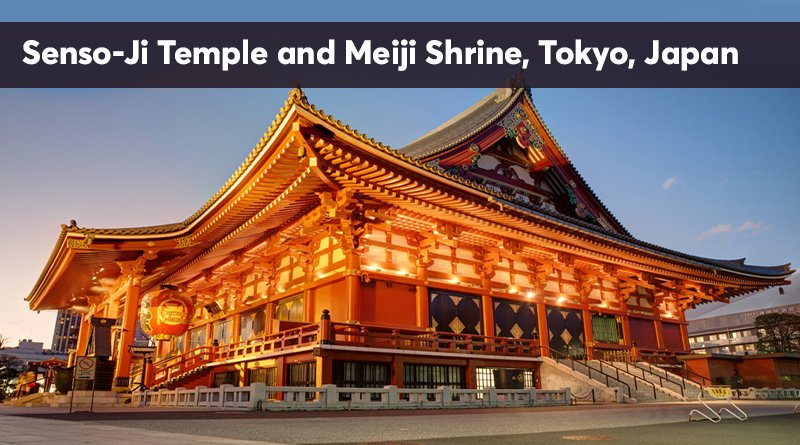 This temple was built in 628 AD. Furthermore, this temple receives almost 30 million visitors each year, making it one of the most visited pilgrimage places. Furthermore, it has a 5-storied pagoda that glows during the evening because of the accent lighting. Moreover, most of the city's celebrations take place at this temple. In addition, the Mejo Shrine is situated near this temple dedicated to the shrine of Emperor Meiji. Therefore, the suitable time to visit this place is in the early morning during weekdays because of less crowd. However, if you want to connect and have a mesmerizing trip, then you can visit it on weekends. Similarly, you can visit Nezu Shrine, Zojoji Temple, Yushima Seido, Yasukuni Tenmangu, Atago Shrine, Hie Shrine, etc. 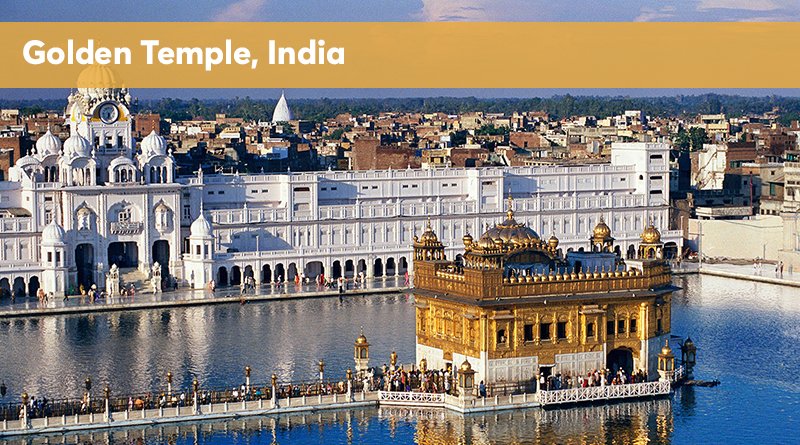 This temple is located in Amritsar, India, which is a pilgrimage site for millions of devotees. Furthermore, the temple has a staunch Sikh foundation and distinct identity, historical background, and values. The best part is that this temple is open for all people despite their religions and faiths. Moreover, it is also known as the Harmandir Sahib and is the most sacred gurudwaras of all. In addition, this place provides you peace, and there is also Amrit Sarovar inside it. This temple was built in 1600 and is the most significant shrine in Sikhism. You can also eat 'langar' where around 3500 volunteers serve food. Therefore, the best time to visit the Golden Temple is between November and March because of the pleasant weather. Henceforth, this might be the ideal time for you to sight-seeing.